Weber piano was once synonymous with American made pianos. A lot of big named pianists used these pianos for years. They are still used by many people but the Weber name is no longer it’s own. It has gone through several companies since the beginning of the 20th century.

Weber itself, started in 1851 in New York. The company produced many pianos for performers and recorders alike. The pianos from Weber also became very popular in Europe. Several royal families ended up buying their pianos. Although owned by another entity, Weber pianos are still known for being reliable and having good craftsmanship behind them.

Weber first was owned by Aeolian-American, another instrument company, but that company went out of business in 1985. At which time, Weber was sold to Young Chang. Young Chang was a Korean piano manufacturer and they then sold the company to Samsung Group two years after buying the company.

Like many companies that produce fine pianos, they focus solely on the upright piano and grand piano. The two traditional sounds of the musical world.

There are eight options under the Weber line of piano. These include four uprights and four grands. Of the grands, two are classic grands, one is a baby grand, and one is a professional grand. Uprights come in a professional upright, a designer console, a studio upright, and a series upright.

You know a bit more about Weber and what they offer now. If you want to buy a Weber, make sure that you take a look at our various writeups of Weber pianos. We have created informational writeups to help you know what each piano is used for and the benefits of that piano.

The Weber Piano company has a rich history throughout the world for years. These pianos were once considered to be the official piano of Europe’s Royal Families.

Each instrument they craft is created with the same quality and expectations in mind. As the 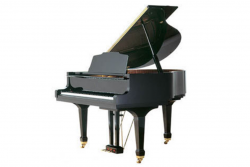 official piano of the Vatican, it is expected that the company maintain the same quality standards that they have always adhered to. Weber’s W150 is a professional grand piano that has a four foot eleven inch size, putting it in the baby grand category of pianos.

You can purchase the Weber W150 in a variety of finishes. For polish finish you can find it in ebony, white, mahogany red, mahogany brown, or walnut. For a satin finish you can find the piano in an ebony color. No matter which color you choose, you will get a piano with as grand of an appearance as it’s sound.

For ages now Weber has been producing some of the finest instruments in the world. They aren’t just talk either. The Weber piano was at one point the official piano of Europe’s Royal Families.
It is also the official piano of the vatican. Many opera houses have featured these pianos for their 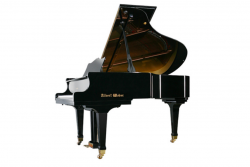 rich sound. Throughout the years Weber has not compromised on their sound quality.

The Weber AW 185 is a conservatory artist grand piano that lives up to the name of the brand. It puts out a wonderful sound that would make any musician proud to own one. A AAA solid spruce soundboard sourced from the best spruce gives the AW 185 a wonderful voice that sings in a warm, rich tone.

Like with all of the other Weber grand pianos you will find a German Renner Action and German Able Hammers inside. Both of these help to contribute to the amazing sound and playability of the piano.

The AW 185 is available in two finishes. For both the polish and satin finish options, the coloration is Ebony. No matter where you want to put the piano, either color will fit in well.

Weber has been constructing pianos designed for musicians since 1852, that is over 150 years of quality. From German craftsman comes a piano that is both a musical masterpiece and a 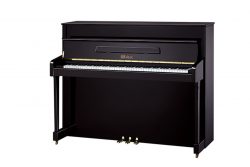 mechanical marvel. The Weber W-114 is an upright piano build with that skilled artisanship in mind. The designer behind the piano was an award-winning designer. Some say that the 4 foot tall W-114 breathed new life into the Weber line.

For the Weber W-114, Del Fandrich utilized a new design technique, a floating soundboard. This soundboard design allows the sound to echo throughout the piano and area around it. Attached directly to the soundboard is a bass bridge. Together, these two features allow for an enhanced bass sound than most other pianos, even larger ones.

There are two different types of finish available: a polish finish and a satin finish. The polish finish comes in ebony, white, mahogany red, mahogany brown, and walnut.
The satin finish comes in ebony. A color combination and design formatting is designed to fit every occasion and location. The small height allows it to fit in many spaces that a grand piano won’t while keeping an amazing sound quality.

Weber has multiple models under their name but the W-121E stands out amongst some of the others. With the power of an award-winning designer behind the creation of the Weber W-121E,

it is a piano worth the Weber name.

Keys on the Weber W-121E are designed to have an even touch. As you play, pressing the keys around the board takes no more power than any other key.

This model features a floating soundboard design that sits in the center of the piano with space above and below the soundboard. Directly coupled to the soundboard is a bass bridge that enables the Weber W-121 to deliver high quality bass that will rival even a full sized piano. It also features full agraffs and double coated hammers to help the piano last a long time and deliver the expected sound quality.

Weber only constructs the W-121E in one finish, an ebony color. The furnishings on the piano are chrome, adding to the beauty of the instrument. At 48 inches tall, this piano will fit in quite a few places that a grand piano won’t.