Premium musical instruments are a weird segment as often you have to end up paying a lot for something very less. We would assume that a $1000 instrument would be twice as good as a $500 instrument but that is usually never the case. That is why plenty of research has to be done to make sure that you are getting enough of a return on your investment when purchasing a premium instrument to make it feel worthwhile. With that in mind, let us take a look at the Kawai ES8, a digital piano in the $1000 plus segment and see if it has the quality and features to justify the cost. 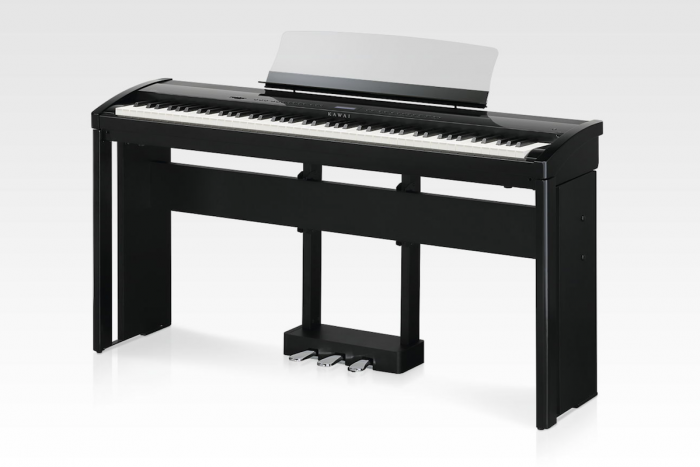 This is a digital piano that has been built like a tank. It can easy withstand pretty much any of the rigours you might encounter on the road. All the buttons, knobs, and the keys feel like they have been made from really high-quality materials. It also has been designed meticulously to replicate the feeling of a high-end piano. It is just glossy enough to give it that premium feel without being a fingerprint and smudge magnet. While it might lack the looks of a furniture style piano, it has its own charm that doesn’t make you feel like you are making a compromise in the looks department.

All this, however, comes at a cost and that cost is in the form of weight. It weighs around 50 lbs without the stand or the pedals and that can be bit difficult to move around but then again, a piano isn’t supposed to be moved around all that much. The weight is a blessing once the piano has been put in its place as it gives you a very solid feeling. The full 88-key layout gives the piano plenty of real estate in the top half but the placement of buttons and knobs have been done intelligently in such a way that everything is within reach and not spread out all over the place. The LCD screen could have been slightly bigger as its diminutive feature gives it a very distinguished look but does sacrifice functionality and any type of setting changes can become a real pain.

At this price point, you would expect a portable digital piano to feel pretty much like a real-life grand piano would and the Kawai ES8 does not disappoint. It has one of the most authentic feeling key-action that we have seen on a digital piano. Even the subtle notch feel that you get on a grand piano when the key is gently pressed has been replicated to perfection. This will allow pianists accustomed to grand pianos to be right at home on the ES8. The Responsive Hammer III keys are more than a gimmick. The keys are weighted just right and what is more, everything from the velocity curve to the sensitivity of the keys can be adjusted. This allows you to set the keys up just the way you want and are used to.

Another feature that blew our minds were the counterweights. Normally you would have to shell out money in the range of $5000 to get this feature but this one not only has counter-weights installed but it is also very intelligently placed to make the keys just firm enough and quick enough to return to its resting place to produce the most realistic grand piano feel in a portable form. Each key has 3 sensors rather than the two found in this price range. This allows the keys to be more responsive and accurate and a bit more flexible with what can be achieved from a musical stand-point.

This is where the ES8 has taken a highly focused route which you will either love or hate. Kawai has focused on creating a small set of the sounds that are of the highest quality than providing you with hundreds of mediocre sounds. This highly focused nature of the portable piano makes it ideal for the pianists who just want a few more sounds but in the hands of a keyboardist will feel highly underpowered. There are only 34 sound samples available on-board which range from acoustic piano sounds to various jazz instruments. There is no denying that these sounds are of the highest quality but the options for different instruments are a bit too much on the lower side. That brings us to the kind of audience that this portable piano is targeted towards.

This isn’t a device that tries to be the jack of all trades. It is a portable piano of the purest form and if you are looking to use it for anything more than playing piano pieces or maybe a string section then you will be disappointed. It is one of those devices that does a few things but does it really well. It isn’t meant for arranging music or to do one-man band sort of things. It is purely a piano player’s instrument which can be a bit of an oversight considering the sound-processing capabilities of this instrument. Now that we have explained exactly what this instrument does let us take a look at the actual sounds that you are getting.

The piano sounds are one of the most authentic we have come across especially at this price range. They are realistic and of extremely high quality and that combined with the triple sensor technology and the Responsive Hammer III technology make this portable piano come alive like it is nobody’s business. We get that sound has a very subjective nature and what might appeal to one person might not be satisfactory to another. Instead of trying to judge whether you will love the sounds produced by this portable piano, we will look at it from an objective point of view and compare the sounds to the actual instruments this portable piano is trying to replicate and it has done a really good job with regards to that.

The piano sounds as we already alluded are very authentic but so are the other sounds like strings, harpsichord, organs, etc. Focusing on a smaller set of sound has really paid off in the form of quality and authenticity. Whether you will like these sounds will depend totally on your individual preferences. We do have to point out that the lack of a pitch wheel does affect the usability of some of the sounds in a realistic manner.

This was a pleasant surprise as the ES8 made good use of all the real estate available to them to squeeze in a couple of speakers rated at 15W each which is actually quite loud and can easily be used in a medium sized room without the need for an extra set of speakers or amplifiers. The quality of sound from these speakers are pretty good too and work reasonably well for an on-board system. They are still a bit underpowered to reproduce all the frequencies and to truly hear the dynamic range of the sounds that this portable piano can produce, you need to pair it with a high-end external sound system.

If you are purely a pianist then all the features that we have mentioned so far would be good enough to win you over but if you are a pianist who likes to dabble in a bit more then there are some features to appease you as well. It has an auto-accompaniment feature that is quite useful and has over a hundred styles with fill-in sections like a drum roll to make this portable piano sound more complete. It lacks the customizability of a synthesizer but is good enough to give the piano enough versatility for solo performances where the focus is on the piano parts rather than the accompaniment.

A feature that we really loved is the ad-lib feature that allows you to play riffs without breaking a sweat. When this feature is engaged, the last 17 keys become ad-lib keys and you can engage one of them to play a riff and allow you to sound quite sophisticated. Advanced pianists won’t be needing this feature and is aimed more at people still learning the nuances of the trade.

While this device tries to replicate the feel of a traditional piano as closely as possible, it hasn’t alienated itself from modern technology. You can connect an iPad to it and this makes editing a lot of the settings an absolute breeze. It also increases the sound samples available considerably as you can use Kawai’s app that is available for free to get more instrument sounds than the 34 available on board. These sounds come in free and paid variants and while they do not sound as good and dynamic as the on-board sounds, they do a satisfactory job when it comes to some casual playing.

Another area where this piano scores really well is in the effects department. There are some high quality effects like chorus, reverb, brilliance, tremolo, and phasers that can all be tweaked to your liking. The instrument sounds can be layered as well allowing you to get the sound of two instruments at the same time which is nothing new but what sets the ES8 apart is the ability to add individual effects to the layered sounds. This means that you can have a reverb effect on the piano and add brilliance to the strings and then layer the two sounds without losing any of the effects.

We do have to mention a shortcoming of this portable piano. While it has the ability to play both audio files and MIDI files, the MIDI files aren’t always replicated authentically. This is because this instrument only has 34 sounds as opposed to the 128 required to replay a MIDI file. Any sound such that the ES8 does not have, like a guitar sound, will be replaced by an on-board sound which can sometimes end up sounding funny.

This portable piano can be best described as a niche device that tries to be versatile. As a replacement for a piano, it works really well. The keys and the piano sounds are as authentic as a digital system can be. It is all the extra things that this piano tries to do that it is mediocre at best. The rhythm section and track arranger are all too underpowered. It is primarily targeted towards the professional pianist but a keyboardist who wants to authentically replicate the sounds of multiple instruments must stay away from the Kawai ES8. It is like an exceptionally dressed gentleman trying to be hip. It is what it says it is – a portable piano. Anything additional it offers has to be taken with a grain of salt. It is easily one of the best portable pianos at this price but lacks the versatility of more expensive options.

– Most authentic keys with the truest piano feel

– Heavy and not exactly portable 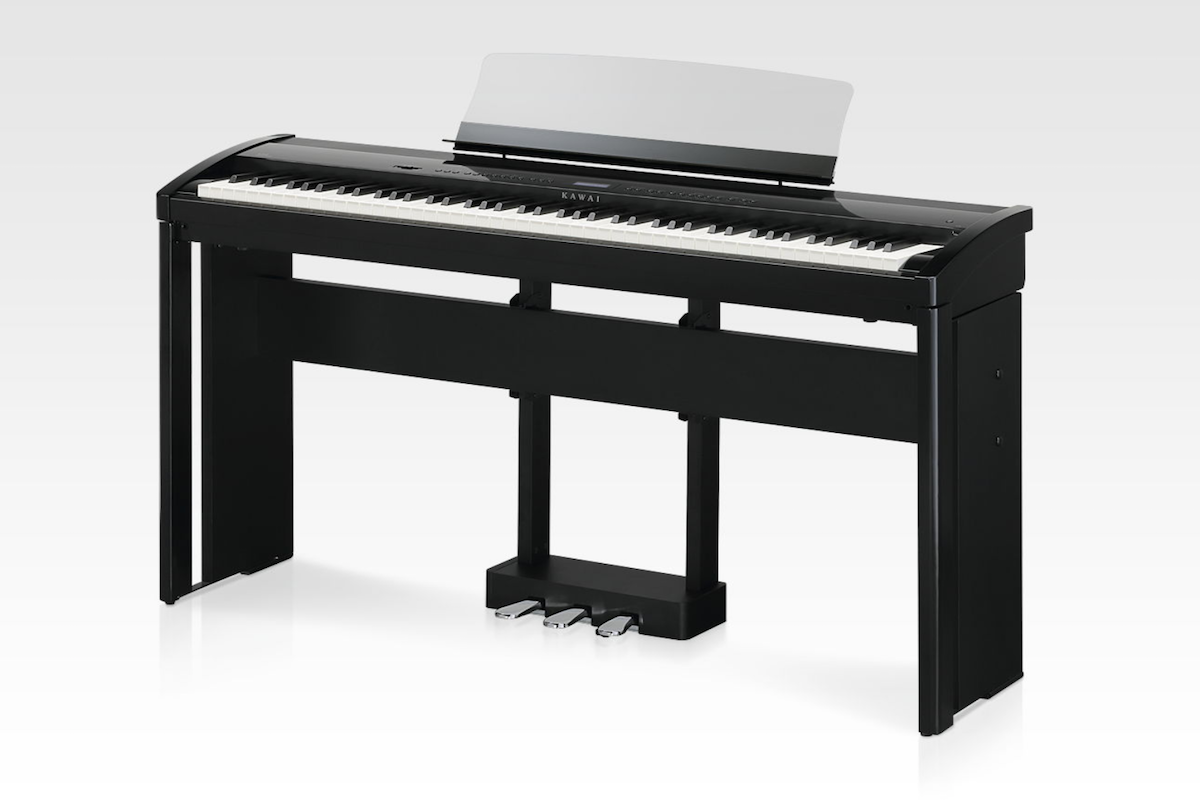