Marketed as the world’s slimmest piano, the target audience for the Casio Privia PX-S1000 is very clear. This digital piano is mainly meant for the musician who is on the move constantly and does not want to lug around something massive and heavy. The flip side of these “ultra-portable” devices is that they often come with some compromises on the feature front. This can often be a deal breaker for musicians as most musicians prefer a better instrument even if it means that they have to carry around a few extra pounds and their digital piano takes up more real estate.

They often come at a premium price too. The Casio Privia PX-S1000, however, claims to be a game changer as it is aimed at being very portable without making any big compromise and without burning a massive hole in the pockets of anyone who wishes to own it. So, without any further delays, let us find out if the Casio Privia PX-S1000 can hold a light to its claims.

Right off the bat, the Casio Privia PX-S1000 is like no other digital instrument in terms of looks. It seems to follow the recent trend in smartphones. The keys occupy the majority of the digital piano. This is a clear signal to anyone looking for plenty of buttons and sliders that they should stay away from the Casio Privia PX-S1000. Instead, it looks like the purest digital form of an acoustic piano. It is not drab though. It uses its minimalistic approach in a real classy manner. The narrow and long approach is nicely done to give it a sleek and slender look which coupled with the right stand can make it visually on par with an ensemble of beautiful musical instruments.

Another big concern with space-saving gadgets is that they often tend to be fragile which is the exact opposite of what is needed from a portable instrument but the Casio Privia PX-S1000 appears to be structurally sound enough to stand up to the rigors of life on the road. Another great thing about the Casio Privia PX-S1000 is its price. It does not command a premium for its portable nature and charges just enough to make it an excellent buy on a limited budget. If you are in the market for a straightforward and simple digital piano that does not make unnecessary compromises while delivering it in a package that is as slim as it can get, there are few if any contenders for the Casio Privia PX-S1000. It sure looks the part. Let us see if it can deliver where it really matters.

Another big surprise was the presence of speakers in such a small package. Normally speakers in portable instruments end up taking the biggest hit and often lack the dynamic range to do justice to the sound engine but this being a modern instrument uses sound projection and can actually produce high-quality audio output. It is more than adequate for most practice sessions and only starts to falter a bit when pushed really hard.

There is a very good reason behind the massive girth of acoustic pianos. It takes a lot of behind the scene real estate to give it its unique action. While digital pianos do not need an equal amount of space, thanks to modern electronics, they still require some amount of space beyond the keys. The fact that the Casio Privia PX-S1000 is so slim and it comes with in-built speakers meant that there was very little space available for the components that try to replicate that acoustic grand piano feel. This had us skeptical and we thought this would be the area where the biggest compromises were made, however, Casio managed to surprise yet again.

It doesn’t have the fully weighted keys found on high-end digital pianos but the Smart Scales Hammer action keyboard works quite well and is the closest you can come to the real deal at this price point and in this form factor. This is also meant to be a beginner-friendly digital piano and as such features the option of choosing five sensitivity levels with the first being completely off to the fifth being the most realistic. While the Casio Privia PX-S1000 is not perfect when it comes to the way it feels, it is more than adequate for the price it commands. The artificial ivory and ebony texture are quite great though and look cool too.

The lack of real estate to put buttons hasn’t stopped Casio from providing a decent amount of additional features. The way Casio has worked around the space problem is by turning to modern technology yet again. Instead of using traditional mechanical buttons, the buttons on the Casio Privia PX-S1000 are touch sensitive. This not only saves space but also looks and feels rather cool. These buttons, however, have one flaw which is the lack of tactile response. This makes it quite easy to activate or deactivate something accidentally and not even realizing it until you start playing. There are a few LEDs but the lack of a screen does make controlling all the features a bit difficult especially in live conditions. 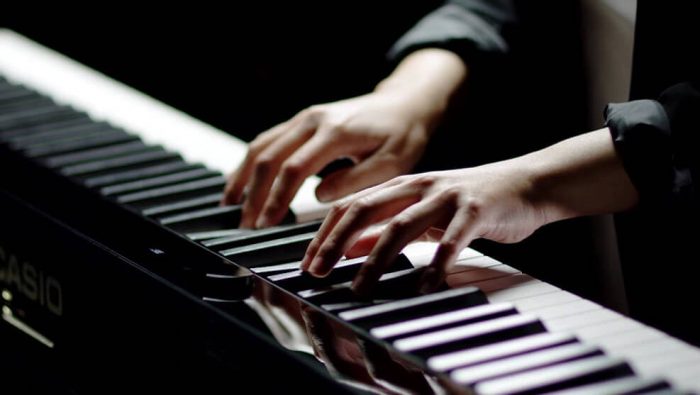 The effects also aren’t very exhaustive but the few that are available are quite useful. There are a few reverb options that allow you to create some realistic tones. You can also add chorus and brilliance to the final output and we found them variably useful under different circumstances. Overall, there aren’t too many bells and whistles and Casio has taken a detour from its usual quantity over quality approach which as far as the Privia PX-S1000 is concerned is an excellent move. Other options like layering and splitting are also available and will be appreciated.

This is a modern instrument and has all the necessary connectivity options that would be needed. There are stereo output jacks and jacks to connect pedals to give the complete piano experience. A USB to host connection is also available that can be used to connect this digital piano to a computer and be used as a MIDI controller for your DAW. It also has Bluetooth connectivity using which it can be connected to smartphones and tablets. This in conjunction with Casio’s Chordana Play app allows you to take control of every feature available on the Privia PX-S1000. This makes up for the lack of a screen. This digital piano becomes really easy to use when paired with the Chordana Play app.

Portability is a no-brainer as far as the Privia PX-S1000 is concerned. At just 11.2 kg or a shade under 25 lbs., this digital piano is quite dainty by piano standards. The shape also is quite conducive to being carried around in different modes of public transport. Another very good feature that allows the Casio Privia PX-S1000 on the portability front is the ability to run on batteries. 6 AA batteries can power the Casio Privia PX-S1000 for a little more than 4 hours which is really excellent if you are someone who has to move around a fair bit or hate wires in your practice area in general.

The Casio Privia PX-S1000 is not just targeted at those pianists who are looking for a portable option but also at those who do not want to spend a whole lot of money. It doesn’t have the most realistic keys as far as the action is concerned but the rest of the digital piano is just great for the price. This piano is also a nice step forward as far as the use of modern technology is concerned. The touch-sensitive keys could have been implemented a lot better though. It is inexpensive but still manages to generate some really good tones thanks to the use of modern electronics and a high-quality sound engine. The 192-key polyphony also helps in this regards. The portability is, of course, its biggest selling point. In fact, most professional pianists will be able to use this in a professional setting without many complaints which is a great achievement at this price point. For a beginner, the Casio Privia PX-S1000 is an absolute no-brainer.

– Can be operated on batteries

– Not the most authentic graded action